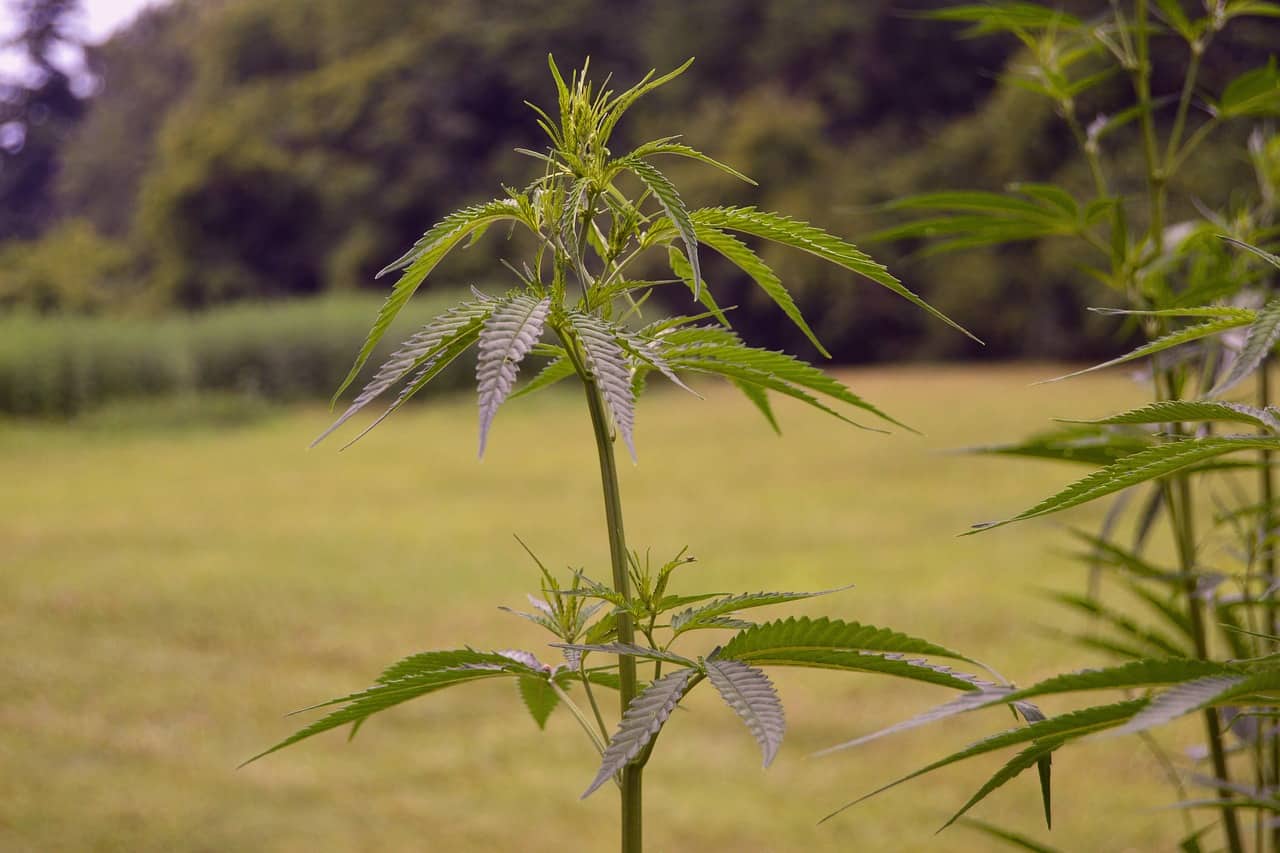 Up until the last century, hemp was traditionally one of the most common raw materials used to make a number of products ranging from clothing and textiles to paper and building material. One of the earliest crops, its cultivation is said to have originated in China, dating back to around 10,000 BC, where archaeology found hemp rope imprints on broken pottery from the region.

The Chinese were also the first to produce the world’s first paper in 150 BC, which was incidentally hemp-based. Further evidence found that they used hemp in medicine, warfare, clothing, building, and more.

Hemp made its way into Europe in around 1200 BC, and from there, it spread all across the world. It was so essential that in 1535, Henry VIII passed an act that forced all landowners in the UK to grow ¼ of an acre of hemp crops for every 60 acres they owned. If not, they would be steeply fined for breaking the law. Up to the 1920s, 80% of clothing was made from hemp fiber.

Hemp played a prominent role in the manufacture of many essential products, but eventually, cotton took over. Harvesting and processing hemp was expensive, cumbersome, and required a lot of time and effort. So when the cotton gin, invented in 1793, made it quick and simple to separate cotton fiber from seeds, hemp production fell behind as cotton was now much easier to produce.

Years later, in 1861, a farmer in Bologna, Italy, developed a machine called “scavezzatrice,” which was basically a hemp decorticator. Almost 60 years later, George Schlichten invented a new and improved version of the hemp decorticator and also received a US patent for the same.

The machine could remove the top leaves for fertilizing the next crop and separate the hurd from the stalk, leaving the hemp fiber in good shape for spinning. However, this was around the same time the newspaper and synthetic textile industries were growing.

The invention caught the attention of these industries, who decided to use their power to squash the competition they perceived from Schlichten. He then failed to find investors, and the production of his hemp decorticator ceased, making it easier for the other industries to take over the market.

Since then, hemp production faced challenges, but in recent years, it is once again starting to gain popularity. After years of prohibition, the 2014 Farm Bill in the United States allowed farmers to grow hemp crops for research purposes. Four years later, the 2018 Farm Bill further expanded the law, making hemp cultivation officially legal as long as farmers comply with their state rules. Hemp farming quadrupled the following year, according to a report by Vote Hemp.

Industrial hemp technically requires less space and water than corn or cotton, but even with these factors contributing to the increasing production of the plant, farmers continue to face challenges during the harvesting and processing of it.

The hemp plant’s fibrous stalk is tough, which could destroy machinery used for other crops, so suitable equipment is expensive or not easily available to these farmers – each combine can cost as much as $500,000.

They could come up with their own solutions to tweak the machinery but could potentially harm the quality of the crop. While the hemp industry is certainly growing steadily, it is yet to see a sufficient enough demand to kickstart an active effort to make hemp-specific equipment easily available.

That is where a hemp decorticator comes in. These decorticators are built specially to process hemp. Without decortication, the hemp crop is of little value but once decorticated, you are left with two great products, each useful in its own way. Here’s a little more information about the process:

Hemp decortication is a process that involves the use of a specific machine called a decorticator to separate the tough, woody interior of the hemp plant from the soft, fibrous exterior. It uses grinders, rollers, blades, and other such tools.

The output generated produces both hurd and bast materials, each to be used for different purposes. Hurds can be utilized to make ceiling panels, bedding materials, hempcrete, and other industrial products while bast is used to make clothing, textiles, ropes, home furnishings, and shoes, to name a few.

Once the hemp crops mature, they are harvested using the appropriate tools. For manual harvesting, a sharp sickle or machete would work well, but a mechanized disc mower or the sickle mower would be ideal. They should be cut a few inches above soil to avoid the hard stem but leaving too much stubble would cause a loss in fiber yield.

Once that is done, the retting process begins. Retting refers to treating the harvested hemp for a certain amount of time before the decortication to allow for easier separation of the bast from the tough core.

It involves allowing microorganisms and moisture to rot or degrade the surface of the plant, i.e., the pectin holding it together is slowly broken down.

There are a few ways to go about the retting process – these include field retting, chemical retting, and water retting. After the retting is complete, the de-leafed stalks need to be dried and further processed through a decorticator. Modern decorticator machines can do the job whether or not the stalks have been retted previously.

A lot of farmers don’t have in-house hemp decorticators, so the product needs to be transported to another location for decortication. In this process, which is called “breaking,” the machines use a reactor that passes stalks between fluted rollers to shatter or break the hard, woody core into small bits, separating it from the fiber.

The technology can work through tons of hemp per hour and can segregate every part of the plant efficiently. This method was known to be difficult and time-consuming, but decorticators simplify it substantially.

They also make the scutching process easier, which beats the fiber bundles to further separate the raw material from other particles. It is followed by “hackling,” which combs shorter or broken fibers out of the stalk and aligns them in a continuous sliver for spinning.

One of the biggest limitations the hemp industry faces is this processing period. Often times, modern hemp decortication deals with challenges such as transportation – moving the hemp to the decortication facilities can turn out to be rather expensive. The same tough nature of hemp that makes it more long-lasting than other fibers like cotton can make it difficult to move.

Any profit that could be made expires after it also needs to be transported hundreds of miles in addition to initial costs. Moreover, there are only a few of these decortication facilities across North America, such as Pure Hemp Technology, Colorado, and Canadian Greenfield Technology Corp, Alberta.

The legalization of hemp farming has caused more farms to arise in various US states, but unfortunately, processing facilities still remain scarce. As mentioned before, the hemp industry’s come-back has not generated enough of a demand for manufacturers to invest in it.

But the mobile hemp decorticator surpasses the problems that farmers face with stationary hemp production sites. These machines allow hemp growers to process their crops and maintain the quality without being forced to transport them elsewhere.

Mobile decorticators are loaded onto trucks and driven across the country, providing hemp production services to growers. The growers are charged based on the size of the farm or acres to process, quality levels of the hemp, and also on having manufacturers available to purchase the harvested product.

In 2018, HempLogic, a hemp consulting firm in Washington and Power Zone Agriculture, Colorado, now Formation Ag, teamed up to launch HempHub USA, a 20-state tour across the States to provide a mobile decortication option for hemp farmers in the country – they would drive to a farm, process the hemp and then get back on the road and drive to the next farm.

These new and capable machines cost about 2 million to 2.5 million. They can process about 10 tons of hemp per hour, which is a huge leap compared to conventional hemp processing, which is done in a much longer period of time. They can easily be rented or leased to reduce the high costs for new farmers.

In addition to being cost-effective, they also work as a safe option – in situations where the crop fails, or the farmer changes their mind about cultivating the crop, the decorticator can easily be moved and rented by another. The invention is pulled behind a combine to collect additional leaf and plant material that can be used as well for a second stream of revenue.

It also allows for the material to be emptied directly into the truck, making the process all the more efficient, clean, and ready for transportation. What’s more, is the large capacity of the units saves more time by preventing frequent unloading.

6ix Hemp Inc in Denver is another mobile hemp decortication service that specializes in on-site harvesting and processing of the plant. The company says it can “harvest, decorticate and package up to 100 tons or 33.3 acres per day” for professional-grade hemp growers located anywhere in the United States as long as the crop can be legally produced in that state. Their services include on-site decortication, sales, and distribution.

The company offers three different types of contracts at various price points, where the farmer pays for 50%-70% and gets to keep 20-30% for free, depending on the chosen contract. No matter what plan they opt for, they are receiving a certain percentage free of charge, which always works as an incentive to sign up for the service.

Mobile hemp decorticators are a win for the hemp industry in North America as it expands opportunities for local growers and makes it possible for them to get the full use of their investment in the product – the US retail market for hemp stands at about a staggering $700 million annually but imported grain and fiber hold the majority of the value.

These farmers are also backed up by decortication service companies who provide additional assistance that could be much needed for new farmers. Another benefit of the machine is it allows the industry to gauge where the most hemp growth is occurring and potentially make an investment in a permanent processing facility around the location.

Industrial hemp production can replace a number of raw materials and produce an expansive range of goods, not to mention the environmental benefits it provides. Switching to hemp-based paper would save countless trees and prevent more deforestation – over the course of 20 years, one acre of hemp can produce as much pulp for paper as four acres of trees.

Using hemp biomass, a cheaper and cleaner option for renewable fuels, could reduce our need for fossil fuels and avoid harmful gases being released into the atmosphere. Additionally, it does not deplete the soil’s nutrients quickly and returns up to 60% back to the soil.

With the hemp industry slowly but steadily growing in North America, there are eventually going to be more and more companies coming up with alternate solutions that, like the mobile decorticator, are efficient, cost-effective, and user-friendly.

Due to ineffective resources, supply and demand, regulatory issues, and uncertain profit margins, American hemp producers have so far been unable to compete with other countries like China in their production of the crop.

However, more technological progress in the processing and production of hemp could possibly set the industry on a path to achieve further development and simultaneously expand its market in the country.

Your trusted partner in the Cannabis Industry.

With the help of our team and platform, we can provide your cannabis business with the tools you need to thrive and succeed.

Schedule a live demo today to learn how you can use Nugistic’s technology to grow your business faster.